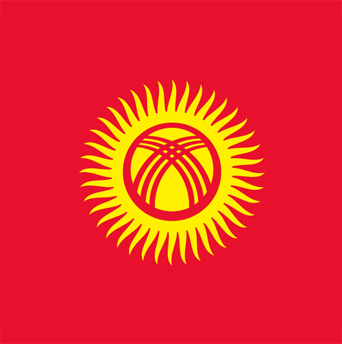 Kyrgyzstan, the country of the Kyrgyz, also called Kyrgyzstan or Kirghizia, has been an independent state in Central Asia since 1991. Kyrgyzstan is one of 15 states of the former Soviet Union. In the north it borders Kazakhstan, east and southeast China, southern Tajikistan and western Uzbekistan.

The former Soviet republic is also called the “Switzerland of Central Asia” because of its imposing mountains.

The landscapes of Kyrgyzstan are among the most spectacular natural spaces on earth:

Glaciers, deserts, lakes, steppes, and forests make the country a celebration of colors and formations. Without the walnut forests of Kyrgyzstan, we may not know walnuts, apples, and plums whose wild ancestors on the slopes of the mighty Tien Shan Mountain survived the Ice Age.

The richness of these natural beauties, the forests and cultivated plant diversity, contrast with the poverty of people living in Kyrgyzstan.

The area of Kyrgyzstan is slightly larger than half the area of Germany.

In other words, it is about five times as large as Switzerland, or five and a half times the size of Baden-Wurttemberg, and thus the second-smallest country in Central Asia after Tajikistan.

Central Asia includes the countries and regions in Asia that have no access to an ocean or whose rivers do not flow into an ocean. These are Turkmenistan, Uzbekistan, Kazakhstan, Tajikistan and Kyrgyzstan.
In part, the Caucasian countries of Armenia, Georgia and Azerbaijan, as well as Mongolia, are counted as “Central Asia”.Kyrgyzstan is located on the geographical latitude of northern Spain, between the Biscay in the north and Toledo (south of Madrid). The country is very isolated and impassable, which is why it is little known to us – less than Uzbekistan with its architecture, Kazakhstan with the steppes and the Aral Sea or Mongolia.

Kyrgyzstan is a mountain country: more than 50% of the country’s surface area is higher than 3000m above sea level. Because of its mountains, the country is very well known among mountaineers. It is crossed by 90 mountain chains (many along the latitude) and between the lowest and the highest point are 7000 meters. Kyrgyzstan occupies the western half of Tienshan. The Tienshan (Chinese: Heavenly mountains) is part of a large mountain belt, and with more than 2500 km of length twice as long as the Alps. It is bordered to the north by the Kazakh steppe, to the south-west by the still more massive Pamir and to the east by the Taklamakan desert. In the center, it piles up into a huge knot of mountain chains, trot valleys and high steps. On the border to China is the longest mountain chain of the Tienschan (582 km).

The Jenilcek glacier is one of the largest ice streams outside the Polar Regions. It lays “U”-shaped in the mountains and has an area of 816 km², which is one and a half times the area of Lake Constance. The highest mountain of Kyrgyzstan and the northernmost seven thousand is the Pik Pobedy, the “Triumphal Mountain”. It is 7439m high and is called in Kyrgyz Dzengis Cokusu. It was renamed after the victory over Hitler`s Germany. Previously it was called Kann-Too: “Blood Mountain”.

Water is the most important resource of the country. Water brings life to the steppes and deserts around Kyrgyzstan and allows the country to produce electricity.

At the same time it creates conflicts with the neighbors of Kyrgyzstan, not only in the fertile Fergana Valley. Kyrgyzstan and Tajikistan control nearly 80% of the water resources of Central Asia.Large rivers leave the country and end in steppes or deserts without reaching the ocean. The most significant rivers of the region are:
The Naryn, …
The Amu-Darja …
The Chuy ends in Kazakhstan in the Hungry steppe.
The Talas ends in the desert Munjun-Kum (Kazakhstan).

Issyk-Kol: Kyrgyzstan has the second largest mountain lake in the world. It is a closed lake and almost 12 times the size of Lake Constance. Its length measures 182 km, it is up to 60 km wide and 668 m deep.Even during the Soviet times the Issyk-Kol was a popular place for tourism and recreation. The many former sanatoriums for the Soviet Union bear witness to this. It was also a military test area. Weapon systems such as torpedoes were tested here. Recently, Russia signed a treaty with Kyrgyzstan to resume this use.

The lake is slightly saline and there are warm springs, the reasons it does not freeze in winter. Surrounding the lake you come through very different climate zones. The north bank of the lake is much more rain-laden than the southern shore, where the vegetation is rather desert-like. Especially the northeastern end and the area bordering the lake to the east are therefore very suitable for agriculture.

Kyrgyzstan has very comfortable climatic conditions, but sometimes very changeable. It is characterized by high temperature differences within a day and in a year. The Kirghizs speak of “four seasons within one day”: in the morning fresh, warm like summer at noon, in the evening autumn and in the night it is snowing.Positioned in the center of Eurasia, far from the oceans, surrounded by deserts, causes a generally continental, dry climate, with marked seasons. The rugged surrounding, the extreme height differences and the water mass of the Issyk-Kol cause very different climate zones: from continental to almost maritime. The winters are cold up to -30 degrees Celsius, the average temperature in summer is + 30 degrees Celsius.

Kyrgyzstan has a diverse flora and fauna. There grow pistachios, almond trees, willow-leaved sea uckthornb, blackcurrants, hedge roses – just to name a few. The country has the largest and oldest walnut forests in the world.

About 5.3 million people live in Kyrgyzstan. The population consists of 80 different nationalities: 68% Kirghizs, 15% Uzbeks, 10% Russians, Kazakhs, Tatars, Koreans, Tajiks, Ukrainians, Germans, Turks, Uyghurs, Chinese, Dungans and others. The first Germans came from the Volga during the colonization of Tsarist Russia in the 19th century. Mennonites, who looked for a place where they could live in peace. In 1941, after the attack of the Wehrmacht on Russia, Stalin had all the Volga-Germans, as well as many other “suspicious” ethnic groups, deported to Central Asia. Today only a fraction of Germans live in Kyrgyzstan, mainly elderly people. Most Germans from Kyrgyzstan remigrated to Germany in the 90s.40% of the population lives in the cities. The largest cities are the capital Bishkek in the north and Djalalabad and Osh in the south. The illiteracy rate is 3%, which is certainly a credit of the Soviet Union.

The majority of the Kirghiz, about 80%, are Sunni Muslims. About 17% are Russian-Orthodox Christians. There are also other small religious communities.